We got an opportunity to introduce OpenStreetMap to the National Service Scheme (NSS) Volunteers of Vidya Academy of Science and Technology (VAST), Thrissur. It was a two days workshop – 18th and 19th June, 2016 and it was wonderful. All of it came through Mr. Manoj Karingamadathil – my friend and an active Wikimedian. It was his college, who studied there four years ago. Mr. Anil, the NSS Coordinator of the college formally invited me to introduce the mapping techniques to the NSS Volunteers. Mr. Kishore Athrasseri, another FOSS GIS enthusiast also joined us for the introductory session to the volunteers.

Map of the campus

There were more than 60 volunteers of the college for learning mapping techniques. A few of them were from M E S College of Engineering, Kuttippuram. As OpenStreetMap is the best suitable solution for introducing the mapping techniques for students learning technology, we opted that. After the general introduction to mapping and OSM, the volunteers explored it and created their own user accounts in OSM.

After they familiarised with it,they were grouped into 13 teams (4-5 members in each team) based on the features they are assigned to map, as follows:
1. Campus boundary team
2. Roads team
3. Building (South Block) team
4. Building (North Block) team
5. Building (Main Block) team
6. Mens hostel team
7. Ladies hostel team
8. Workshops team
9. Library team
10. Other buildings team
11. Play grounds team
12. Nakshathra vanam team and
13. Tree count and biodiversity team
For making teams, we collected the details of students and their smartphones via a google form, and randomly grouped them using a spreadsheet, based on the type of their smartphones. The field survey technique was the same as we used during the Koorachundu village panchayat OpenStreetMap mapping party, with the android mobile phones using three apps viz. GPS Logger, OSM Tracker and Keypad Mapper. These apps were shared with the team members at the beginning of the introductory session, using Xender/Bluetooth. After constituting teams, we explained the team members, how to use these apps in the field for collecting data. Then they were sent for field survey (2 hours approximate) after lunch. After the field work, each team gathered in the computer lab and edited the OSM using JOSM and iD with the collected GPS data. We helped them on the basic tagging of the features.

On the 2nd day of workshop, we and the teams focused on the correction of errors, and checking the correctness of the data they entered to the OSM. It was a thriller experience when we showed the 3D rendering of their campus renedred in http://demo.f4map.com/on the projector. 🙂

3D rendering of the OSM.

3D rendering of the OSM.

We took a photograph of the whole team, after lunch.

For the people who don’t know this college, here is the OSM link of the place:

Explore the 3D rendering of the place here:

See the beauty of the two days team work. 🙂 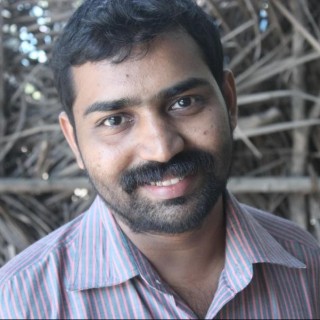 Secretary to a Village Panchayat in Kerala, India. - That is my job. Also, am a research scholar at the School of Environmental Sciences, Mahatma Gandhi University of Kerala. I love to experiment with RS&GIS and map the places on OpenStreetMap. I love to draw maps as well. I use Free/Open Source Software tools for almost all of my works and sometimes advocate for it. I am somewhat aware of the environmental and ecological activities of the region. I volunteer with the L10n/i18n team of Swathanthra Malayalam Computing for the Malayalam language. I edit Wikipedia and upload photos, drawings, etc. to the Wikimedia Commons. I maintain two personal blogs each in Malayalam and in English and write whatever rubbish I think, whenever I please. I love to hike/hitch-hike either alone, or with my friends. Hmm... I do whatever I feel interesting.